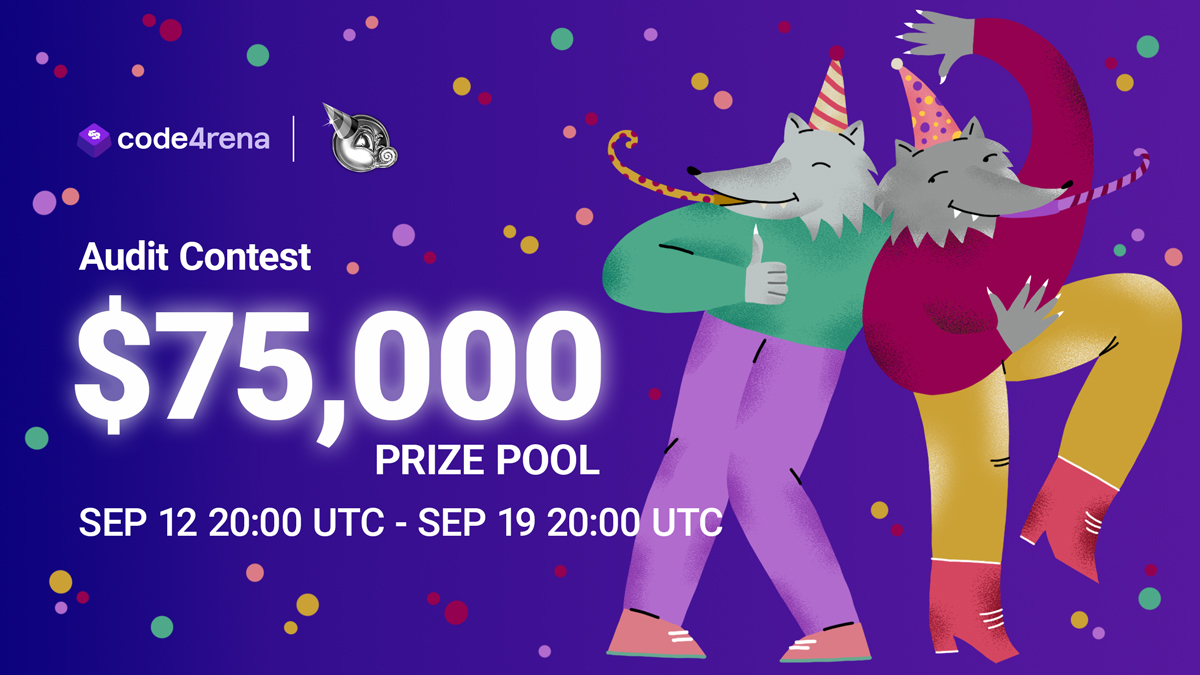 A protocol for buying, using, and selling NFTs as a group.

🚨🚨🚨🚨 The code and docs for this contest are located in a separate [PartyDAO Protocol Repo]. 🚨🚨🚨🚨

High-level Video Overview of the Protocol

Here's an example one-liner to immediately get started with the codebase. It will clone the project, build it, run every test, and display gas reports (except that the TS tests do not have a gas report since they only use waffle).

Refer to the code repo README for targeted, individual test commands you can run.

Note that slither does not seem to be working with the repo as-is 🤷, resulting in an enum type not found error:

Seems to be related to https://github.com/crytic/slither/pull/1300, which will be included in the 0.8.4 release.

Additional out-of-scope contracts that are either consumed by or referenced by the in-scope business logic:

At a high level, the typical business flow of the key contracts in this protocol goes like: Here's an abbreviated inheritance graph of the major contracts in the protocol (leaf nodes are deployable):

Throughout both phases of the product (crowdfund and governance), we rely heavily on external protocols. It's critical that our integrations with them are correct. The governance proposal contracts (ListOnOpenseaProposal, ListOnZoraProposal, ListOnFractionalProposal) are areas of highest concern because a bad integration there can either cause the loss of an NFT held by the party or can brick the party until the proposal can be canceled.

The ProposalExecutionEngine implements all the logic with parsing and executing proposals passed by PartyGovernance. In addition to this it is stateful, reading and writing to storage slots shared with PartyGovernance and also utilizing its own "private" storage slots. Low-level storage operations are used to ensure these regions of storage are predictable and do not overlap.

To save gas, we do not use traditional reentrancy guard modifiers anywhere in our protocol. Instead, we try to make use of some existing state variables already being touched to prevent reentrancy. That, or we simply allow reentrancy in places that we've decided are low-risk. These assumptions should be tested.

The PartyGovernance contract creates a record of voting power for members of the party (and delegates) every time a governance NFT is moved or delegation is changed. We search these records during voting to ensure members cannot game proposals by voting with voting power earned after voting begins. It's important to have high confidence in this accounting logic to ensure malicious proposals cannot be passed without consensus.

A major goal that runs through the protocol design is to protect governance parties from unfairly losing the NFT they formed the party around. We call these NFTs "preciouses," and we have logic that restricts the way parties can interact with these NFTs to prevent them from being moved, or having the potential to be moved, without passing a rigorous (sometimes unanimous) governance process. For example, to list a precious NFT for sale on Opensea, it must first go through a Zora auction to mitigate a malicious whale with voting power from listing it for far below floor price and buying it themselves. We want to be sure these safeguards are effective for the majority of NFTs.

There are some proposals that can take multiple executions to complete (eg. ListOnZoraProposal), as opposed to proposals that are completed in one transaction like it commonly works in other governance implementations. While a multi-step proposal is in progress, no other proposals can be executed until it is finished. There is support for canceling proposals should they get "stuck" for any reason.

The off-chain storage pattern is used across almost all contracts to drastically reduce the gas costs involved in reading/writing storage. We verify the data coming off-chain is correct by checking it against an on-chain hash of the data we expect.

The explicit storage buckets pattern is used in both the PartyGovernance and ProposalExecutionEngine implementation. Instead of relying on the compiler to assign/access these storage buckets, we manually define pointers that explicitly map to the storage slot of our choosing that does not overlap with any automatically assigned slot.

In places where we want to make sure delegateCalling does not alter state (is read-only), we use a custom _readOnlyDelegateCall() function. It works by delegateCallinging on a contract but always reverting with the return data than using a try/catch statement to bubble up the result to return.

We do not use any explicit state to indicate that a proxified contract has been initialized before (to prevent re-initialization attacks). Because all our initialization logic runs inside constructors, we simply check that our address has no code in it.

There are two different upgrade models at play in the protocol. One is through the Global registry contract, which other contracts will use to look up the latest instance (address) of a contract. Often this is done just-in-time, such as looking up the PartyFactory when a crowdfund has won and is transitioning to the governance phase. This registry is also used to look up the latest implementation contract for Proxy instances when deploying new crowdfunds or governance parties. The PartyDAO multisig (which controls the Globals contract) has the ability to unilaterally change the addresses pointed to in these cases. The other upgrade mechanism is voluntary, occuring when a governance party passes a proposal to upgrade its ProposalExecutionEngine implementation to the latest version (also looked up in Globals). In either case, publishing a contract that is not backwards compatible with existing crowdfund and governance instances can brick them.

This code is provided under the Beta Software License Agreement.