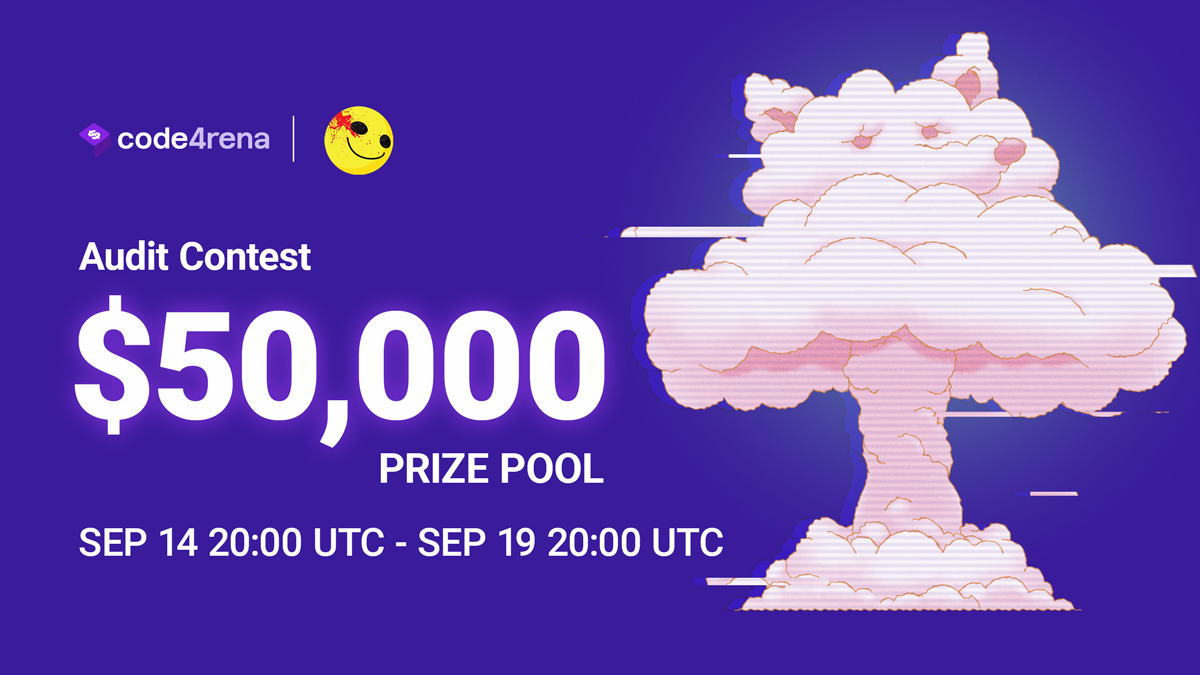 A suite of structured products for assessing pegged asset risk.

Y2K Finance is a protocol to insure(hedge) against pegged assets and speculate on depegs.
The aim of this protocol is to allow users to HEDGE & RISK these insurances, also providing yield to incentivize early depositors on both side of insurance (buyers and sellers).
We consider insurance sellers to be the same as Risk users, or collateral depositors. We also consider insurance buyers to be the same as Hedge users, or premium depositors.
This is made possible by having Vaults that leverage ERC4626 and a Chainlink Oracle to determine the current price.
When the price of a pegged asset is below the strike price of a Vault, a Keeper(could be anyone) will trigger the depeg event and both Vaults(hedge and risk) will swap their total assets with the other party.
These insurances last a certain amount of time, and if a depeg event does not happen between that time period, a Keeper will trigger the end of epoch event, being that the Hedge Vault then has to give all of its total assets to the Risk Vault.
It is issued a token representing the depositors position which is 1 to 1 ratio'ed to the deposited amount, and users can deposit that token in a fork of Synthetix Rewards to "yield farm" governance tokens.

Besides these Contracts and their libraries, the only interaction with external contracts is the Chainlink Oracles' 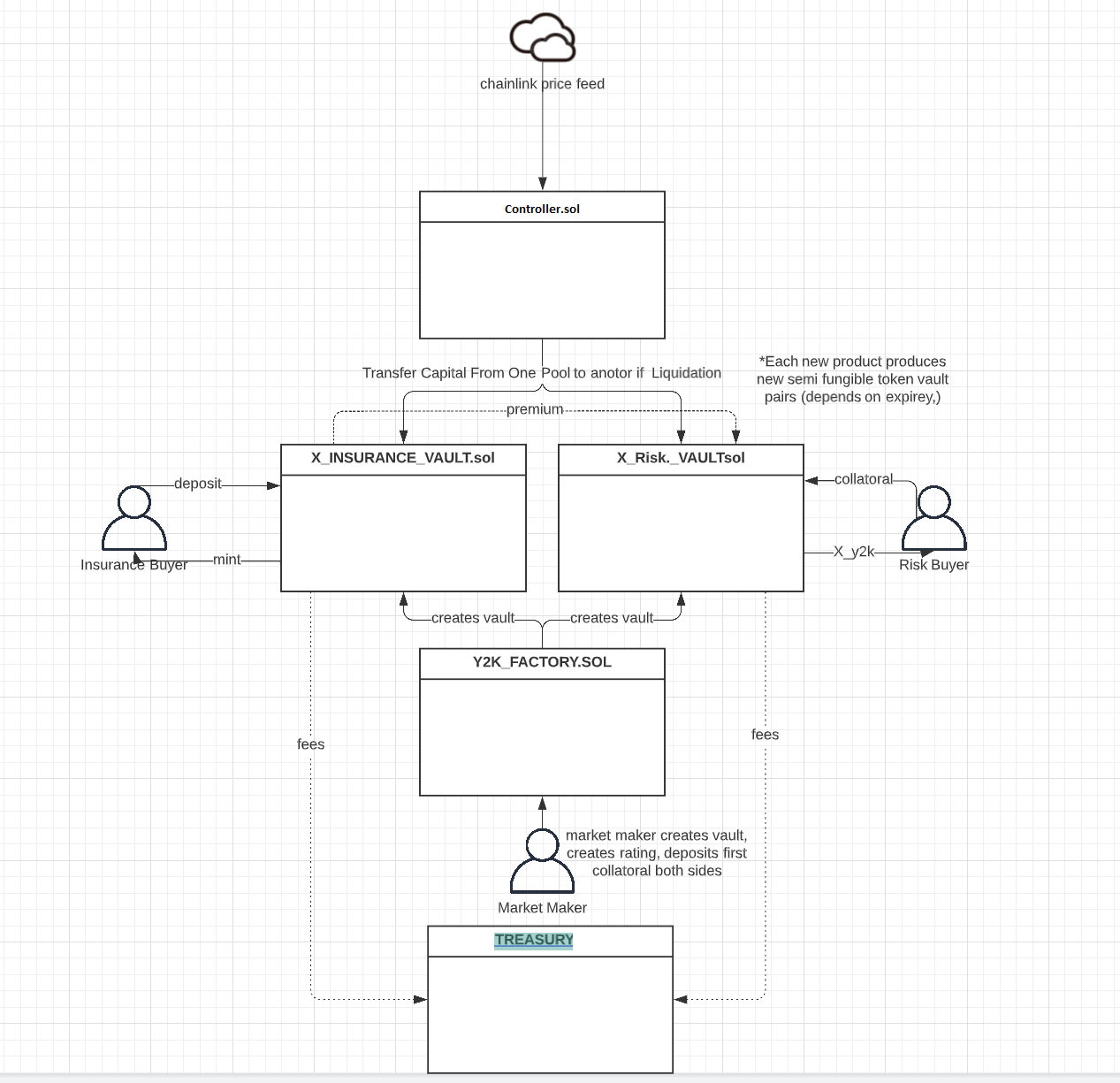 Smart Contract used to call Oracles' latest price data, and trigger epoch end or depeg events. They can be triggered if the Id of that Market/Vault epoch is less then the current block.timestamp, or if the current price of that insured pegged asset is below the Vaults' Strike Price.
These functions will then call that Market, figure out the pair of Vaults of that Market, and transfer the underlying assets between the Risk/Hedge parties. Must mention that inside this contract we convert all price feed results to 18 decimal points, so we can compare to the Strike Price passed by the admin on "VaultFactory.sol"

Y2K leverages ERC4626 Vault standard for this protocol, this contract is a fork of that standard, although we replaced all uses of ERC20 to ERC1155. This is done because we want vaults to have multiple tokens that represent each epoch, so in this contract, ID for the ERC1155 mints has to be the UNIX timestamp of the epoch end date. Also we want to make this into an EIP, Semi Fungible MultiToken Vaults.

Implements "SemiFungibleVault.sol", a Vault in this protocol is defined by its market, a Vault/Market is thus a combination of these params: Token Insured & Strike Price.
Each Vault has then multiple epochs, defined by the ERC1155 Id, allows deposits in WETH only, and mints ERC1155 backed 1 to 1 by that WETH, deposits can only be done until a certain date, called Epoch Begin, minus a variable called Timewindow which is used to make some time between the start of the insurance epoch and last day of deposits.
Withdraws of WETH can only happen when "Controller.sol" triggers the end of epoch or triggers a depeg event. Withdraws have a fee associated with it, which is sent to the treasury, such FEE is represented in this form: multiply your %(percent) value by 10, Example: if you want a fee of 0.5% , insert 5. Fees are attached to epochs timestamps!
To make withdraw amount calculations after the swap of assets, we calculate how much % a user owned of the vaults' total assets prior to swap of assets using finalTVL to log that totalAssets, and then give the user the % he owns of the vault after the swaps. Token symbol is used here to differentiate between the Risk and Hedge Vaults as the calculations for withdrawing from both vaults differ!
Must mention that we want to make these Vaults usable by DAOs, so we accept deposits and withdraws on behalf of other users, by using approve ERC1155 functions on withdraw, and recipient/owner params inside both deposit/withdraw functions.
These contracts have the functions needed to swap assets between Vaults, from Hedge to Risk vault and vice-versa.
Also we allow deposits in ETH, but we convert it to WETH.

Factory for the creation of Vault pairs. A pair of Vaults constructs a Market, a Hedge and a Risk Vault. As said before, Markets are determined by its Token Insured & Strike Price, and have an Index associated with it. Since Markets have Vaults that always come in pairs, some functions use that assumption for their logic, for example arrays that return the vault addresses have in the [0] position the Hedge Vault and on the [1] position the Risk Vault.
This contract allows the Admin role to change params inside the Vault, and also the Oracle associated with the insured token.
Must mention that we expect admin to pass the StrikePrice as a 18 decimal int, so we can compare to the Oracle Price using the same decimals.

Y2K allows farming of Y2K token using these Synthetix forked contracts (adjustments were made to these contracts), replacing all mentions of ERC20 to ERC1155 to allow deposits in "Vault.sol" tokens. Also some params are passed (RewardRate and RewardDuration) to the constructor for admin use.

Contract used to deploy the pair of "StakingRewards.sol" to reflect the Hedge/Risk vaults implementation above.
Must mention we used a keccak256 to hash a market index from "VaultFactory.sol" and its "Vault.sol" respective market epochEnd/id to represent the StakingRewards vaults as an index to be able to query it later.

Since we are deploying on Arbitrum we are forking Arbitrum mainnet for tests, so testers need to specify the --fork-url param for tests to pass!
Example: forge test --match-contract AssertTest --fork-url https://arb1.arbitrum.io/rpc -vv
For additional initial testing parameters check Foundry Book (https://book.getfoundry.sh/faq)
When fuzzing deposits there is a limit of possible valid runs using the Foundry fuzzer, and as such we would like to assess if this is due to a logic fault in the contracts or in testing (applies to testFuzzDeposit() and testFuzzWithdraw() functions in FuzzTest.t.sol since they fail before the fuzz runs end).
When testing for withdrawal approval on behalf of another user we are concerned this might not work as intended, so we would like to assess this as well (when running testOwnerAuthorize() from AssertTest.t.sol it fails).
In total, 3 tests are failing.

We consider the name of the Token for frontend uses, to be in this format "y2kUSDC_99*" , this has both insured token name in CAPS and strike Price.
When using forge coverage tool the automated function coverage output might not work as intended (as in not displaying all of the code covered by the testing suite properly, as of the latest Foundry release)

Inside scripts/DeployRinkeby.sol , is a deploy script with the Chainlink Oracle addresses from Arbitrum Rinkeby.
There is a README inside that folder to help with deployments.
To get testnet ETH use this faucet: https://rinkebyfaucet.com/ and then bridge to Arbitrum Rinkeby https://bridge.arbitrum.io/?l2ChainId=421611
We use a GovToken.sol only for mockup, this contract does not represent our final Y2K token!