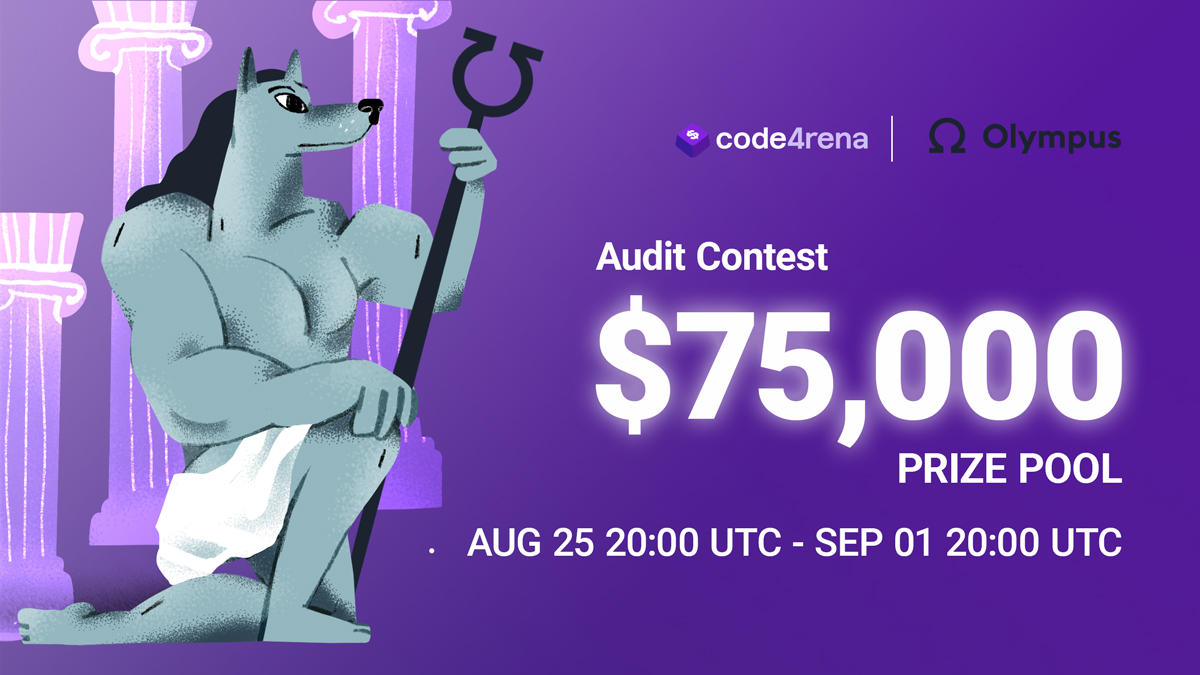 All other contracts (not in scope)

All modules have an assigned 5-byte keycode. Also have no dependencies other than the Kernel.

All policies have their module dependencies defined inside the configureDependencies function. Policies may also have outside dependencies, which will be listed here.

Areas of concern for Wardens

In general, would like eyes on core functionality of the contracts. Gas optimizations are not prioritized but are welcome.

The Bophades project uses the Foundry framework to build, test, and deploy the system. It's expected that you're using a *nix-based development environment. All commands assume you are using a shell terminal and your current working directory is the project root.

If you don't already have Foundry, follow this short guide to install.

NOTE: Slither does not work in the repo (yet). If you find a way to do so, please share in the discord :)

External dependencies are stored in the /lib folder.

Bophades also requires the use of jq for running some tests. jq is a program for manipulating JSON files from the command line, available on most OS's.
jq installation instructions can be found here: https://stedolan.github.io/jq/download/

Once dependencies are installed, you can build the project by running:

The generated bytecode, ABI, and AST node structure is output to the /out folder.

The Bophades test suite is written in Solidity and uses the forge-std library and forge test framework. To run the full test suite, run:

NOTE 1: the Bophades test suite uses a Solidity library that employs the --ffi cheatcode, which allows the test to execute the shell commands defined in the library. These commands simply read data from the /out folder to collect lists of functions which have access control modifiers for automatically generating permissioned accounts. --ffi is enabled by default in the foundry.toml config file for this project.

NOTE 2: There may be an error when testing with ffi:

ERROR foundry_evm::executor::inspector::cheatcodes::ext: stderr err="tr: warning: an unescaped backslash at end of string is not portable\n"

This is caused by an unknown issue, likely with ffi, but is inconsequential - all of the tests should still pass as expected. If you do find out why this issue is present, please let us know!

The project uses a forge script to deploy the system to a blockchain network, src/scripts/Deploy.sol. There are certain dependencies for the project which are assumed to exist prior to the deployment including the OHM token and a reserve token, which are not covered in the scope of the deployment script. However, some test files, such as Operator.t.sol show examples of providing mocks for these dependencies.

The hard-coded addresses pre-populated in the deployment script are for the Goerli testnet versions of dependencies that Olympus has deployed.

To deploy the system, run the following command:

Note: Removing everything after -vvv will simulate the script locally instead of sending to the network.

If you create a .env file and load it into the terminal prior to running the command, you can use the script as written. If the script fails in the middle, you can resume by running the same command and passing the --resume flag at the end.

Following deployment, the system must be initialized with another script, which can be run by calling the initialize function on the same contract:

Olympus V3, aka Bophades, is the next iteration of the Olympus protocol. It is a foundation for the future of the protocol, utilizing the Default framework to allow extensibility at the base layer via fully onchain governance mechanisms. There are a few major pieces to this release: the core registry (Kernel), treasury, minter, governor, and finally, the range-bound stability (RBS) system.

Range-Bound Stability is a system for algorithmically using treasury assets to support OHM exchange rates with its major liquidity pairs. More details can be found here:

The Olympus governor is an adaptation of the Default governance contract, which uses token voting to interact with the kernel as its executor. This allows voters to add and remove contracts from the kernel. There are a few unique systems to this governor, like the net-votes vote counting system (vs the regular quorum voting as is common). More information can be found in the doc below.

Bophades uses the Default Framework to configure the protocol’s smart contracts and authorized addresses within the system. In this framework, all contract dependencies and authorizations are managed via “Actions” in the Kernel.sol contract. These actions are as follows:

All non-Kernel smart contracts in the protocol are either Module Contracts or Policy Contracts, which you can think of as the protocol's "back-end” and “front-end” logic, respectively. In some ways, this shares similarities to the "core" vs. "periphery" design pattern used by protocols like Uniswap: core contracts (Modules) define the core system capabilities, while periphery contracts (Policies) expose the interfaces that enable EOAs use to interact with the protocol's various features.

While most protocols have ownership defined at the contract level, Default's philosophy is to define ownership at the protocol level, within the Kernel. This is the function of the Kernel's Executor—it is the address that has the ability to execute actions within the Kernel. In Default, the executor defaults to the Deployer, but this can be set to any address using the Kernel Action ChangeExecutor: it's entirely possible to have a Kernel managed by a single wallet, or a multisig, but it can also be a contract. In Bophades, the Kernel's owner will be the Governance (Policy) contract.

Protocols may sometimes have to call authorized functions to manage protocol operations, such as moving treasury funds or making adjustmenets to protocol parameters, requiring the use of operational multisigs to function correctly. To accomodate these situtations, the Kernel includes a simple role-based access control system. Not to be confused with the permissioned module modifier, Policies have their own modifier onlyRole to prevent certain functions to be called except by pre-approved addresses. In the Kernel, roles are simply two-way mappings between an address and a typed bytes32 variable, which is assigned in the Kernel via grantRole() and revokeRole(). These functions can only called by a separate address known as the Admin. The Admin cannot execute Kernel Actions—sole purpose is to grant and revoke roles.

Like the Executor, the Admin address defaults to the deployer, but can be changed using the Kernel Action ChangeAdmin.

The last and final action that can be performed by the Kernel is MigrateKernel. This action is particularly sensitive and should only be done the utmost care attention to detail. In Default, any contract that is installed or configured in a Kernel.sol needs to have an internal variable that points to the contract address of instance of the Kernel it is intended for. As a result, the same instance of a Module or a Policy cannot be reused across other Kernels. However, there may be circumstances in the future where new changes are made to the Kernel, like new Actions that are developed, gas optimizations found, or security improvements made that warrant porting the protocol contracts to a new instance of a Kernel without redeploying the contracts.

The MigrateKernel Action reconfigures the internal variable for each contract registered in the Kernel, which will brick it. There are no forseeable plans to use this action in Bophades, but it's important to be aware of its' existence.

Modules are internal-facing smart contracts that store shared state across the protocol, and are used as dependencies for Policies within the protocol. A module is a mix of a microservice and a data model: each Module is responsible for managing a particular data model within the system. Modules should have no dependencies of their own, and their logic should be limited to modifying their own internal state: in other words, a Module contract should not read from or the modify state of an external contract. By and large, EOAs should never call module contracts directly — if ever.

In Default protocols, Module contracts are referenced internally as 5 byte uppercase KEYCODE() representing their underlying data models. For example, an ERC20 token module might have the keycode TOKEN, while a Treasury module might have the keycode TRSRY. This abstraction is intended to help clarify and distinguish where side effects occur when the protocol experiences external interactions, which should simplify both reading, writing and auditing its business logic.

In Bophades, we have the following Modules:

In addition, Modules have a VERSION() and optional initialization logic INIT() thats called when the Module is integrated into the Kernel, which is mainly used when an existing module is upgraded and its state needs to be migrated. However, the contracts in Bophades do not utilize either of these properties, so for the purposes of the audit, these can be largely ignored.

Modules often have permissioned functions which should only be called by authorized Policy contracts, such as minting tokens or withdrawing treasury funds. These functions should include a permissioned modifier to ensure only authorized contracts can call access them.

In Default protocols, Policies must declare their dependencies to the Kernel as part of the contracts state. You will notice that each Policy contract has two functions configureDependencies(), which return a list of Kernel modules by their Keycode, and requestPermissions(), which the function selectors of the privileged functions they need to call from within the contract logic.

Policies are not "stateless": they can store their own state. However, unlike Modules, the state in Policies should only be used internally, and never as part of another contract's logic. One mental model you can use is that Policies store local state in the protocol, while Modules store global state: if you find that any state is re-used across multiple Policies, it should most likely be abstracted into a Module.

The following Policies are included in Bophades: